The SHAC Trial - Political Sentences Are Good for You 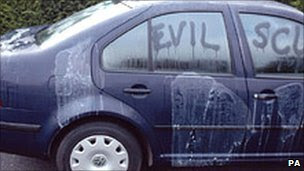 The second group of SHAC defendants have been sentenced. Once again a small group were held accountable for everything that has ever happened to Huntingdon Life Sciences and it's associates – I think others can articulate what a sham of a show trial it was. That isn't the point of this article.

My point is simple, while distressing for those involved, the fact politicised sentencing is necessary is a sign of our effectiveness. If any one thinks multi-billion pound industries and the governments they control are going to let ordinary people tell them what to do  they are deluding themselves! No matter what tactics you use if you are actually effecting them they will be trying to stop you by whatever means necessary.

As a movement we need to be proud of the fact that we are considered such a threat that mere involvement in a animal rights campaign can lead to sentences longer that those given to murderers! Because if we are going to win then we will have to fight them and they play nasty. It's when animal activists stop getting political sentences we need to worry!

Media Lies are Good for You!

The media is of course now full of nonsense about how every action ever done in the name of SHAC is the fault of the defendants (even if they were children at the time of these actions and many haven't even been proven). But even if the lies were true – who cares? I'm not saying I condone every one of those actions but all of them pale into insignificance when compared to puppies being punched in the face, being  poisoned in the name of sweetener, having pipes shoved down their necks and being mutilated.

Anyone that says the actions of animal activists so far have made them 'as bad' as the animal abusers are seriously twisted. I seriously don't see the equivalence.

So I say let the media do our work for us! Let them make companies think we are all 'terrorists' and therefore back down all the quicker. Let the media lies fuel the fire and move us closer to a day when all animals are free.

Now is not the time to lose heart. The battle has only just begun and they have just begun to start fighting us – things are not going to be easy. But for every last animal locked inside that hellhole there is only one single option open to us we must fight and we must win!


Love, Light and Liberation for All. Human and Non-Human!