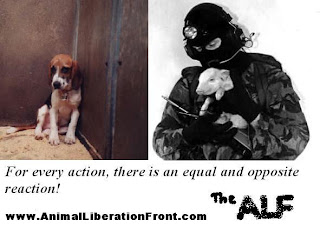 Speaking after the second wave of guilty pleas from the SHAC trials DCI Andy Robbins, of Kent Police state “Since this investigation began in 2007, there has been a sustained reduction in criminal activity linked to animal rights extremism.”

Does the DCI have a point? Has state repression effectively crushed much of the militant edge that effectively complimented the lawful protests conducted by the vast majority of us in the movement?

I have always been a lawful activist but appreciate the work of the underground. The effectiveness of lawful activity is often directly linked to the actions of more militant forces. Something I think some of my aboveground colleagues often forget.

While it is certainly true that since the 2007 shake up things have improved and gradually got back to 'business as usual' within the community, it would be dishonest to over look the lasting effects the trials have had. The UK animal rights movement was very much shaken by the arrests and repressive sentences and there is no getting away from that.

To some extent the police repression has worked. Rather than simply fuelling the fires of resistance as has been the case in the past, the police have succeeded in crushing some of the spirit of militancy within the UK scene.

Peaceful activists are bullied by police at demonstrations and face repeated arrests. This is not an attack on 'unlawful activists' and it's time for us moderates to realise that! The police are not combating the 'extremists' they are combating all of us. The conditions are right for militancy.

My more experienced, older friends, tell me that the UK movement goes in waves. The UK animal rights movement has always been versatile and rebellious but how far will the police be allowed to push the movement before the next wave of rebellion begins?
Posted by AW at Wednesday, September 08, 2010