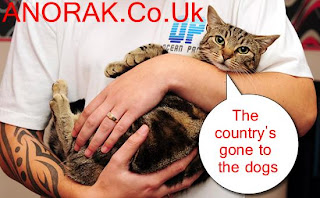 A bit of moderately good news is the 'cat bin woman' Mary Bale has now been charged with animal cruelty. Bale has been charged with causing “unnecessary suffering to a cat” as well as “of not providing the animal with a suitable environment” - you don't say!

Hell, as far as the police are concerned throwing a cat in the bin isn't even against the law! As a police spokesperson put it at the time “we have not arrested the woman because she has not committed a criminal offence.” But then again neither is it a criminal offence for man to hit a woman with a baton or kill a newspaper seller when it comes to the cops, so no wonder they are so confused about the law. Poor things!

Anyway, now all that is left is for some Magistrate or Judge to dish out some insignificant slap on the wrist and  everyone will be happy, right?! Don't you just love our justice system?
Posted by AW at Monday, September 20, 2010