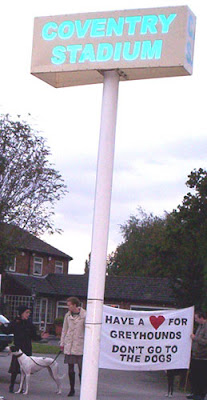 Coventry dog racing track will not be re-opening after the Greyhound Board of Great Britain (GBGB) refused to grant the necessary licence. It is Greyhound Action's Greyhound Remembrance Weekend in a weeks time (24th-25th July) and what better way to kick it off!

Greyhound racing is a deadly business with even those welfarist types at the RSPCA saying that at least 20 greyhounds a day from the industry 'disappear' presumed killed. In addition to this dogs are injured and killed in the races themselves. Could you remind me why they call Britain 'a nation of animal lovers' again?

The track in Coventry (when it was still open) attracted almost weekly protests according to Greyhound Action and the campaign was very successful in persuading people to boycott the business. GBGB clearly made a smart business move on this one as the track had already when bust twice in the past (with the help of local activists) leaving a load of debt behind!

This news just shows the effectiveness of sustained campaigning against the right target. The great thing about local animal rights groups is that we can deal with local problems by consistent targeting until we win! The animal rights movement is at it's best both in terms of local and national campaigns when it clamps it's jaw shut and won't let go – consistency and determination is key. Well done to the Coventry lot, nice one! Let's bring the whole industry down now!

If you want to help from the comfort of your armchair please contact your MP about the Racing Dog Protection Act – which could hopefully improve things.
Posted by AW at Saturday, July 17, 2010