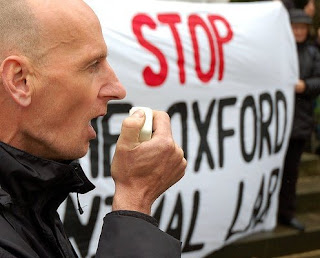 The country is safe again as dangerous thought criminal Mel Broughton, of the terrorist group SPEAK (that hands out leaflets and hold signs against an new Oxford animal lab), is put back in jail.

Mel was convicted of conspiracy to commit arson and having an article with intent to destroy property. Mel was already imprisoned for this offence but was released pending re-trial because of the small matter of the judge misleading the jury in his case. He was clearly guilty of the offence because he owned sparklers and a battery connector and there was some inconclusive DNA evidence.

Although conviction on the grounds of the above evidence may seem dubious to the more sceptical among you – please remember that Broughton is a dangerous thought criminal!

As Detective Inspector Kevin McGuire of Thames Valley Police puts it “he [Mel Broughton] has been proven to be someone who believes direct action, in the form of planting explosives and setting fires, is acceptable.” As we know the worse form of crime is the thought crime. A thought criminal that believes these things is automatically responsible for any action he might deem acceptable. The ownership of otherwise mundane objects by a thought criminal demonstrates his intention to commit criminal acts. That's why Broghton is guilty beyond doubt.

It is also worth remembering that Mel was such an evil thought criminal that frustrated police officers were caught on tape stating they would 'wage a dirty war' against him. As the officers said at the time there was a 'need to persecute him'. The hard work of  Thames Valley Police in waging this dirty war seems to have paid off with this dangerous thought terrorist now in jail.

This terrorist is so extreme that he was given 10 years. Even the BNP nonce that attacked his child girlfriend when she broke up with him got under 5 years – it just shows how evil Mel must be. Praise our justice system for keeping us safe from him.

Those people that support Mel should now feel very intimidated about taking action for the animals and sink into apathy, restricting activism to on-line petitions – if these extremists wish to show support for Mel that is clearly the best way to do it.


This article has been revised for publication by the Ministry of Truth in accordance with The Party's policy of Newspeak.
Posted by AW at Friday, July 16, 2010