Marmite vs. BNP – “Whoever wins, we lose” 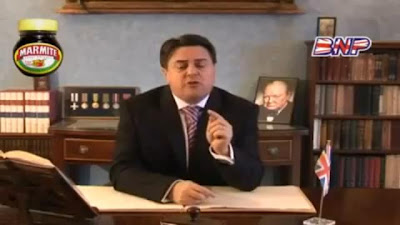 The far-right racists of the British National Party (BNP), you may re-call, ran a rather strange party broadcast with a Marmite jar in the corner of the screen at the last election. The advert was apparently a dismal attempt at humour using the strap line - 'Love Britain, Vote BNP' which as somehow supposed to spoof Marmite's 'Either You Love It or You Hate It' slogan.

It turns out Marmite's owners the animal experimenting speciesists Unilever were very angry about this and got in the lawyers. Personally I don't see what they were moaning about I really don't see how you can further besmirch the reputation of a company already linked to cruel, pointless animal abuse for the next ingredient in their consumerist household product – but that's just me. Anyhow the up shot is that the BNP are going to have to pay Unilever a (big) undisclosed amount of cash after the racists wimped out of facing the multinational in court.

Rumours are that the BNP could be on the brink of bankruptcy over this – which is hilarious if true – but with the serious downside that the extremists at Unilever are set to benefit. Our job now is to bring Unilever trouble themselves, this does not mean bankrupting them it just means causing them to lose more than they gain from continuing to use animal tests. Unilever are in it for the money, if it's financially more profitable to not torment little creatures they will stop, so let's make it happen.  It's time to bring down all oppression once and for all. Animal liberation!
Posted by AW at Sunday, July 18, 2010